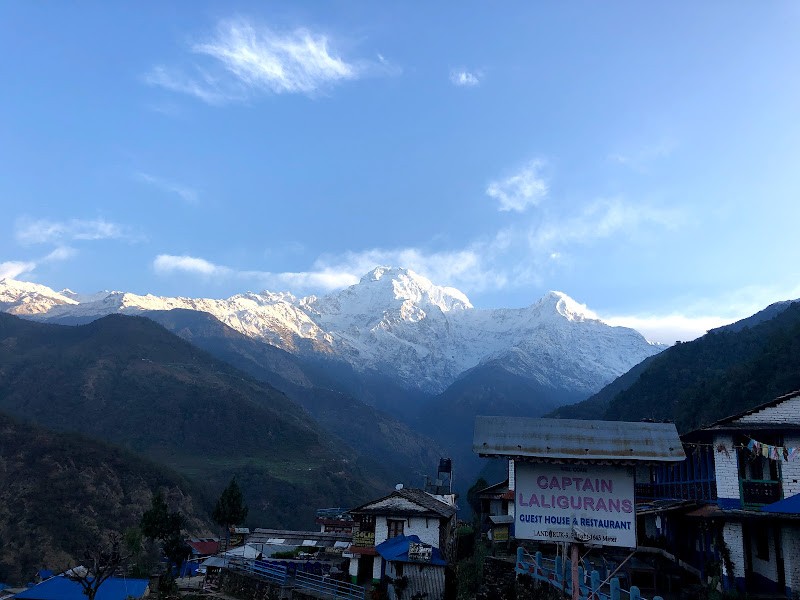 One of the most popular short treks in Annapurna region is the Ghorepani Poon Hill trek suitable for all age groups. Thus, it is the best family trip to make you feel close to the Himalayas. Trekking route for Ghorepani begins from Nayapul and passes through many local Gurung villages and a hearty welcome from the tribe.

Poon hill is the ultimate destination of this trek. One of the best destinations in Pokhara for sunrise view and also 360-degree views of a Himalayan panorama including Dhaulagiri, Annapurna, Manaslu, Machapuchare, Himchuli, and other mountain peaks. Ghorepani Poon hill trekking route progresses through an enchanting forest of blooming rhododendrons with exciting views of wildlife of Nepal. March and April are best months if you wish to explore rhododendron forest.

Ghorepani is the local term where Ghora is horse and Pani is water. Thus, Ghorepani is a suggested rest place for travelers. Poon hill is named after the local Pun ethnics that inhabit the village. The sunrise view from the Poon hill is difficult to put into words. Ghorepani Trek is possible throughout the year in which you won’t need to worry about high altitude sickness, as this is a low altitude trek.

+ Expand All- Collapse All

After landing at the airstrip of Tribhuvan International Airport, you'll need to finish visa and custom formalities before, heading towards exit of Arrival Hall. Our representative will be waiting for you with your name placard. He will be your escort to the hotel. After your refreshment, you will then receive a brief instruction regarding your trek

On the 2nd day you will be visiting the medieval town Kathmandu. Out 10 cultural heritage site declared by UNESCO, 7 lie inside the Valley while 4 of these sites exist in Kathmandu. Nepal’s largest Buddhist shrine Bouddhanath, Holy temple of Hindus Pashupatinath, 2,500 years old Buddhist shrine Swayambhunath and The ancient Royal Palace at Kathmandu Durbar Square. You will also be getting time for trek preparation and shopping in the afternoon.

We will meet at the Tourist Bus Park in Kantipath, from where we will begin our journey driving through scenic Prithvi Highway full of beautiful green hills, rice paddy, rivers, forest and rustic villages. The clean and green city Pokhara is one of the best holiday destinations in Nepal located 200km from Kathmandu, which is easily accessible within 5hrs by a private vehicle. We will be visiting Phewa Lake one of the beauty of Pokhara in the evening for boating. And stay overnight in Pokhara.

Leaving hotel after our morning tea, we will begin our path through the scenic road with amazing view of Annapurna at the backdrop. We will then drive past Lumle village to Nayapul from where our journey to Ghorepani Poon Hill Trek begins. Following Modi River, we will be crossing suspension bridge and climb our way through stone staircases to Tikhedhunga village where we will stay overnight.

Early in the morning, crossing the rhododendron and oak forest, we will begin climbing to the top of small ridge that allows panoramic view of Annapurna, Dhaulagiri and other mountain peaks. Moving further, we will arrive at Ghorepani where we will stay overnight.

After waking up at 4am in the morning, we will begin climbing for about an hour to reach Poon hill, which is one of the best destination of Annapurna region for sunrise view. The hill was named after Pun ethnics who have been living in that village. Along with sunrise, Nilgiri, Tukuche, Annapurna Mountain Range and other mountain peaks are also seen. On our way down from Poon hill, we will return back to hotel in Ghorepani for our breakfast. From Ghorepani, we will be going further down towards Tadapani for an overnight stay.

From Tadapani, making a steep descent we will come across a forest of rhododendrons, dense and dark. After walking for 3 and half hour, we will be entering the village of Ghandruk, a slope settlement with mostly stone house inhabited by the Gurung, along with the stunning close-up view of Fishtail, Annapurna South, and Himchuli mountains. We can also get ourselves acquainted with simple but rich cultural and tradition of the Gurung lifestyle at their Museum in Ghandruk and stay overnight in Ghandruk.

Trekking from Ghandruk to Nayapul will take around 4 hours and a drive back to Pokhara. The trek will then lead downhill all the way to Birethanti while stepping onto the staircase of stone slabs, curving in and out of the village and into terrace farm. It will keep on going downhill from Ghandruk till we reach Modi River Valley. From Birethanti, half¬¬ an hour walk takes us to Nayapul where our journey by foot comes to an end. We'll then drive back to Pokhara for an overnight stay.

We will be returning back to Kathmandu on this day, 7 – 8 hours of drive from Pokhara to Kathmandu, while driving through Prithvi highway by the river bank as well as the greenery of the fields with different kinds of agricultural farms on the way back to Kathmandu. And you will be dropped at the hotel.

You can take a rest and get a massage therapy to relax yourself after the long trek. You can also enjoy shopping in the area and get some souvenir for your family and friends. The Alaya holidays will be providing an evening culture and farewell dinner program for you.

Our representative will drop you at Airport 3 hours prior to the scheduled flight. We hope you will have an unforgettable experience trekking time in Nepal with us. And hope to serve you again.

Nepal is one of the landlocked countries in the world, where the population is greatly tempered and influenced by Hinduism and Buddhism, surrounded by two great countries. Nepal has about 30 million inhabitants, a mosaic of religions, cultures, languages and ethnic groups.

More than 126 + different ethnic groups and castes live together. One million people live in the Kathmandu Valley, but 90% of the population lives in rural areas, along with the valleys and the hills of the Himalayan mountain range. Nepal is above all a rural society and a trek in this region will remain a cultural experience made of beautiful encounters as much with the villagers as with the members of the team.

The Himalayan mountain range extending from Pakistan, India, Nepal, and Bhutan is the result of a collision between the Asian continent and the Indian sub-continent. Nepal inherited this collision from several majestic summits over its 800 kilometers long. Of the fourteen peaks over 8,000 meters in the world, Nepal has eight: Everest, Kanchenjunga, Lhotse, Makalu, Cho Oyu, Dhaulagiri, Manaslu, and Annapurna.

Although Nepal is a small country of about 141,000 km, it has many variations in altitude from the Terai at sea level to the world’s highest peak, Mount Everest at the height of 8848 meters. From north to south, you will cross tropical jungles, from terraces at the foot of the Himalayas to the peaks and glaciers of this magnificent mountain range.

Nepali is the official language. On the other hand, there are more than 123 + different dialects. Your companion will speak English and the rest of the team will speak Nepali, but learning the language of a country creates good relationships. Here are a few words to help you:

TIME AND COMMUNICATION (According to Nepal’s local time):

You can buy a SIM card on site. This prepaid local card is available at Ncell which you can easily find anywhere in Kathmandu. To do this, you must fill out a form, with a copy of your passport, visa, and a photo ID! But for about 100-150 Rs, you are assigned a local phone number, to which must be added a credit of communication. Ncell offers different formulas with or without the Internet that also passes in the mountains! Throughout your trek, you can recharge your cell phones. You can also use database internet which gives faster internet access when you are out of the Wi-Fi zone.

ELECTRICITY
You will need a power adapter/converter. The socket works with two plugins. Battery-powered devices are also recommended.

CLIMATE
Our trek season runs from mid-September to May. From the beginning of September, the rain of the monsoon decreased. From mid-October to December, the climate is generally stable, with warm and pleasant days and cold, clear nights. The temperature can reach 25 ° C during the day at low altitude and at night the mercury will drop to 0. Above 3000 meters, the temperature can fall to -10 ° C at night.
Climatic conditions are never predictable, but there is a well-established pattern. Temperatures of day and night at low altitude vary according to the season, but the night at high altitude is cold, no matter the season. Modern equipment and appropriate clothing will keep you warm. 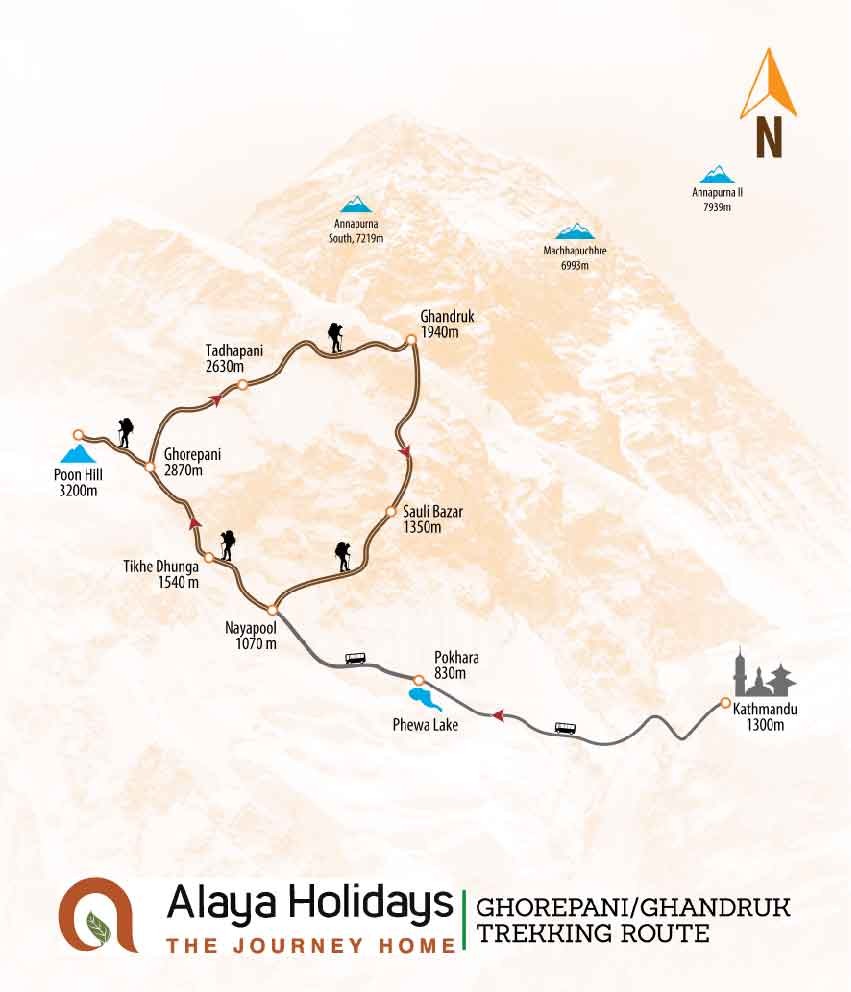